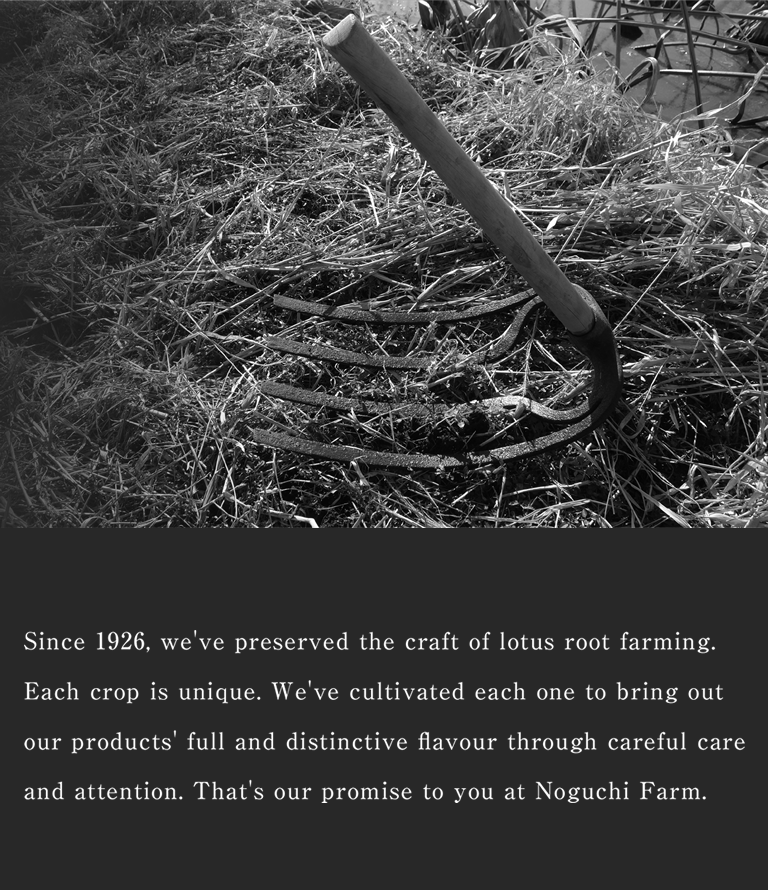 A vast wetland spread along the coast of the Lake Kasumigaura, where the founder of Noguchi Farm, 野口國之介 Kuninosuke Noguchi, started the cultivation of lotus roots. While the coast of the Lake Kasumigaura is now known as the biggest producer of lotus roots in Japan, up until the 1970s it was primarily rice fields. Rice was the main export at the time of the foundation of Noguchi Farm.

The Noguchi family, who had been poor farmers for many generations, sought to cultivate the land. But it was very marshy and chest-deep. In fact, it was too deep for the rice to grow abundantly.

One day, Kuninosuke Noguchi conceived of the idea to plant lotus roots that grew naturally in the Lake Kasumigaura, and was able to harvest lotus roots of good quality. This is because of the “mud” in the field, which was very delicate and smooth like silk, created by the leaf mold of waterside plants that would accumulate over time. This mud was the best soil for lotus roots.

After the introduction of agricultural machinery, lotus roots were able to be collected by using water pressure compressed by an engine pump. However, there was no such machine when Kuninosuke Noguchi started. We heard that he used to drain the water from the field to collect lotus roots one by one using a small hoe.

Even though the water was drained, it was very hard to work in a chest-deep marshy field. Moreover, it is said that he harvested the lotus roots during icy winter, at the end of the year, because lotus root is a typical ingredient for New Year’s dishes.

Kuninosuke Noguchi, having been born in a poor farming family, had no knowledge about the cultivation of lotus roots. There was no other way but to face the lotus roots day after day until he acquired the necessary skills, which is to identify the “face” of each lotus root and listen to its “voice.”

We are very proud of this struggle that our ancestor went through. With this pride, we continue to be earnest in our work in the field.

Wado 6th (713 A.D.)
The compilation of the local gazetteers, “Hitachi Fudoki”, started.
Yoro 5th (721 A.D.)
“Hitachi Fudoki” was completed, in which there was a record that lotus roots harvested in Ibaraki prefecture were used as food.
Tenpo era (from 1831 A.D. to 1845 A.D.)
There is an evidence that Noguchi family has already started farming along the coast of the Lake Kasumigaura by this time.
Late Meiji era (from the end of the 1800s to 1912)
Around this time, commercial growing of lotus roots started along the coast of the Lake Kasumigaura.
Taisho 15th (Showa 1st) (1926 A.D.)
Around this time, Kuninosuke Noguchi, the founder of Noguchi Farm, started the cultivation of lotus roots.
Showa 45th (1971 A.D.)
Given an acreage-reduction policy of rice, rice fields started to be converted to lotus fields and a large lotus root production area started to be formed along the coast of the Lake Kasumigaura in the Ibaraki Prefecture.
Around this time, Kazuo Noguchi started to use a machine to dig out lotus roots.
Showa 55th (1981 A.D.)
Kunio Noguchi attempted the cultivation of lotus roots in a large polyhouse for the first time in the Ibaraki prefecture.
Showa 56th (1982 A.D.)
The cultivation techniques in large polyhouses was established. This technology started to be taught to farmers in various areas.
Heisei 20th (2008 A.D.)
Noguchi Farm was incorporated and became Noguchi Farm Co., Ltd.
Heisei 26th (2014 A.D.)
“Yanagida Renkon (Lotus Root) KUWAHAJIME” was released.
Reiwa 3rd (2021 A.D.)
The logo, the website and the online shop were renewed.